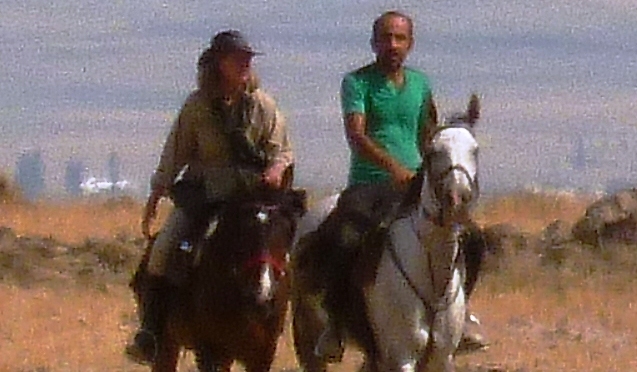 This morning some of the farmworkers’ children came to have a ride on the horses. The amiable Kelebek did sterling service as Ann led her round. We set off at 7:50, heading for new villages on the plain before planning to arrive somewhere in the foothills of the Melendiz range. When asking directions, we were headed towards Çiftlik, some 50 kilometres away. Wherever there are asphalt roads in Turkey, there is an assumption that travellers will want to make use of them. We had to keep asking for toprak yollar, dirt roads in American, assuring everybody we were in search of the old routes, the old ways and not the black-topped highways.

The first village today was very much an automotive stop near the highway, not very prepossessing in architecture or natural setting. Yet Ağacaşar was surprisingly welcoming. We watered the horses at a pump with a hose near a petrol station. Men gathered round to chat and help fill buckets for the horses to drink from. Boys on bicycles rode up. We said we were followers of Evliya Çelebi, taking to the road and following in his hoofprints to learn what we could from travelling as he had done. An old boy on a motorbike offered to escort us and show us the best way out-of-town to meet with a toprak yol. He was as good as his word, with the added advantage that he took us via his favourite teashop, where we could tether the horses and sit in the shade, drinking delicate little glasses of tea and checking in with the local men at their leisure. This was our first proper tea stop, one of the great pleasures of travelling in Turkey, especially by horse, which is indeed thirsty-making.

Soon we were on the road again, this time to Alay Köyu, which lay on the far side of many irrigated fields, some of yonca. We passed modern concrete houses that had been turned into farmsteads with chickens, geese, and beautiful cows. Once a heifer broke away from some women in a courtyard and bounded towards us, attracted by the horses. She was beautiful, a lovely pale pinky-brown with a dark nose like a Jersey cow, with a sweet expression of astonishment. She showed us her horns, then her heels, turning with a dash and bounding back towards the courtyard. Not far on, a herd of cattle, including a bull, turned and began crossing a field in our direction, gathering speed. The cowherd was quickly to the fore, however, and turned his cattle back, waving his stick and halloing. A few paces on, his dogs were lying at their ease in the shade.

At a small house by the track, a woman with a small boy came out and walked beside us, cautioning that there were pesticides in the fields and not to let the horses graze the verges there. Was this an omen of things to come?

A few fields later, men were cutting up the carcase of a cow they said had been poisoned by pesticides. We rode on, feeling uneasy at this accumulating evidence of modern agribusiness going wrong, or of people’s lack of understanding of how to make use of chemical pesticides, and no doubt, herbicides and fertilizers, safely. We came into Alay, heading for the main square, accompanied by the geese who often serve as early warning systems in villages without many dogs. The tea shop was in a modern range of low shops with a chemist, bordering a small green space lined with willows and poplars that provided some shade. Opposite it was the mosque, with a public lavatory that was spotlessly clean. Nearby were a stationers’ shop and two small restaurants. Soon a crowd had gathered to see the horses and Ercihan was in full public-speaking mode. He told them about Evliya, and how important it was for them to connect with their Ottoman equestrian heritage. Some questioned this, suggesting that where there were poverty and unemployment, there was a need for food on the table not Ottoman horse history. As our truck arrived with water buckets for the horses, so did an invitation from a restaurant owner to give us lunch. At the Alay Pide Salonu we feasted on wood-fired-oven roasted peppers, tomatoes, and chicken wings, kuşbaşılı pide (‘birds’ heads’ Turkish pizza, with small chopped morsels of meat), spicy ezme (salsa-like) and yoghurt, washed down with ayran, the yoghurt drink.

When the jandarma arrived to check our passports just as we were mounting up, they were, as usual, friendly and interested in the horses. But an unfortunate incident was about to occur. These things happen in Turkey, too.

After walking through Alay with the horses, we mounted up, escorted by kids on bicycles and dirt-bike scooters. There were muddy streets to cross, shambolic yards, modern concrete houses serving as smallholdings, sometimes with geese and other livestock. It was as if people had moved from their picturesque stone villages to this ugly modern and functionalist one, and many were now both landless and unemployed. The large gathering of young men hanging out near the tea shop suggested that prime minister, now president, Erdoğan’s advice to families to have at least three children was reaping its fruits.

With Jude leading the ride on Anadolu, we continued on across fields keeping the highway in view since our direction was the town of Bağlama that lay along it. We met up with the support crew by the roadside and learned that our destination was a campsite near trees in the far distance at the base of the Melendiz range. After crossing the highway we tracked across a stony plain marked with cairns and dry watercourses. We had left modern farming behind, for now, and entered the land of hill shepherds.

We entered camp at about 4pm. Again it rained on us just after we had set up camp, but cleared up before sundown. The site was beautiful, in a tree-shaded stubble field, and had everything one could wish for except a water source. Yunus Emre and Mevlut prepared a delicious turnip stew. Even habitual meat-eaters praised it, though they questioned privately why we had had vegetarian rations two nights running. There was another splendid campfire. Plans were made for Ince Mehmet to lead the ride the next day on Anadolu, for Jude to ride Tuvana for a change, for Ahmet 2 to ride Zorlu so that we should not have a yedek as we crossed the mountains.