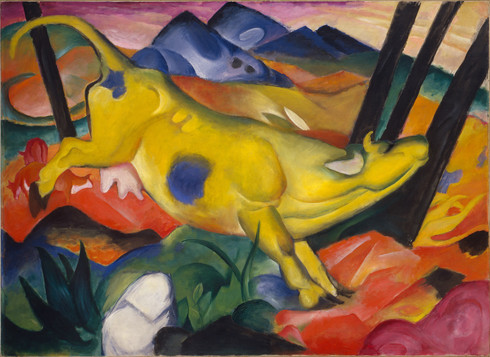 Today, I want to share a favourite place from a journey I took many years ago – to New York City (NYC). Back in 1997, I spent a couple of weeks in NYC and Buffalo, in upstate New York. It was my first journey to the USA and the first time I had travelled without my son, who was four years old at the time. For over a week, I traipsed around NYC, discovering the places that already seemed so familiar to me.

When I was growing up, I daydreamed about visiting this city: the colourful lights of Times Square, the steam rising from the footpath, Central Park and the many, many art galleries, museums and theatres. For some reason I was especially drawn to the architecture of the city, which seemed so futuristic, sleek and modern.

One of the places that I think is very special in NYC is the Solomon R. Guggenheim Museum. Designed by the great Frank Lloyd Wright, the buildings curved edges and spiral like design reflects both organic forms and modernist aesthetics. This text is from the website:

Even as it embraced nature, Wright’s design also expresses his unique take on modernist architecture’s rigid geometry. The building is a symphony of triangles, ovals, arcs, circles, and squares. Forms echo one another throughout: oval-shaped columns, for example, reiterate the geometry of the fountain and the stairwell of the Thannhauser Building. Circularity is the leitmotif, from the rotunda to the inlaid design of the terrazzo floors.

To walk through the building certainly makes you aware of the spiralling, circular nature of the structure. As you wind your way up the walkway, you can look at the art along the walls while being absorbed by the beauty of the geometrical forms of the building itself.

The art collection at the Guggenheim has all manner of modernist artworks and started out as the combination of a number of private collections. Over the years the collection has continued to grow, incorporating works from the 20th and 21st centuries. The website tells this story about the history of the collections development.

The story of the Guggenheim Museum is essentially the story of several very different private collections. Central among these are Solomon R. Guggenheim’s collection of nonobjective painting premised on a belief in the spiritual dimensions of pure abstraction; his niece Peggy Guggenheim’s collection of abstract and Surrealist painting and sculpture; Justin K. Thannhauser’s array of Impressionist, Post-Impressionist, and early modern masterpieces; and Count Giuseppe Panza di Biumo’s vast holdings of European and American Minimalist, Post-Minimalist, Environmental, and Conceptual art. These collections have been augmented over the last two decades by major gifts from The Robert Mapplethorpe Foundation and The Bohen Foundation, as well as by the series of contemporary art commissions that was made possible by the Guggenheim’s unique partnership with Deutsche Bank for the Deutsche Guggenheim, Berlin, the distinct but complementary acquisitions program of the Guggenheim Museum Bilbao, and the Guggenheim UBS MAP Global Art Initiative. Together with numerous other important purchases and gifts secured by the Guggenheim’s directors and curators over the years, these acquisitions have contributed to the formation of a richly layered, international collection dating from the late 19th-century to the present.

Unlike most institutions dedicated to the visual arts, the Guggenheim does not divide itself into departments devoted to specific mediums or eras. Rather, the collection is conceived as an integrated whole that may be continuously enhanced in response to emerging talent as well as a mandate to fill in critical historical gaps.

Located on the upper east side on 5th Avenue (at 89th Street), it is worth walking up from mid-town just to check out the swish apartments and lifestyles of the rich and famous along the way.